Got your attention didn’t it?

The issue of the objectification of women in the media and society is probably one of the most controversial social issues of our time (not really). Sex sells and women are the more sexy of the gender so as you would expect capitalists have done what they have to do to make the profits stretch. It is almost impossible to go through a whole day without seeing some form of female objectification. Some are done tastefully, some funny (Lynx adverts), some outright derogatory (see most hip-hop videos). So is this a gift or a curse? And how is the way women are portrayed in the media affect both the way men perceive women and how women perceive themselves?

It might seem like the highly sought after ‘fat free’ hourglass shape represents an empirical formula for female beauty, but this hasn’t always been the case, and in some parts of the world it still isn’t. A quick look into history will show you that in the past women were expected to have a bit of meat on them, and the paler you were, the more attractive you seemed. I don’t need to stress how much money businesses are making of fake tan and sunbeds. Ironically in Africa women take to bleaching their skin to look lighter. I guess we are all aiming for a shade of caramel. I heard the pale skin represented wealth because it meant you didn’t work in the fields, and the weight represented the same as it meant you had enough to eat. Today the tan shows wealth because you can afford a holiday and the weight loss shows you hit the gym (wealth and fitness).

I have met a lot of ladies with real issues as regards to the media standard of beauty, but I have even met more trying to conform to it by working their ass of in the gym (pun not intended). I personally believe in the idea that the standard of beauty is determined by the society and the time in question. The media only reflects the ideas we already have in our minds but then reinforces it. But maybe I might be wrong and already brainwashed by years of exposure to MTV (when they did show music videos). The second question is do you think the current depiction of women in the media has forced insecurities on ladies today and influenced men to respect them less. While I cannot answer the former (as I am a man), I will say the latter has an element of truth to it. When a girl comes across looking like one of the objectified women we see on TV, men do have the habit of objectifying them. Can this be in anyway seen as empowerment as I have heard some girls argue, or is it downright disrespectful? Famous women all over the world have sexualized themselves to get ahead and while sexual harassment remains an issue at work women still maintain wearing pencil skirts and tight fitting blouses. 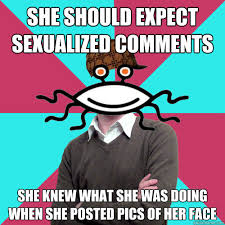 P.S A woman dressed provocatively is NOT an invitation for harassment. But all things taken into account I think we can all agree it increases the chances of that happening.