1. Lagos is just implementing jail sentences to protect women from domestic abuse. Not sure the status in other states but this is a start. I’m now just waiting on the same law to be passed for domestic abuse on men. We all know some Nigerian women would give your average man a good beating after she tightens the wrapper on her waist.

Boko Haram are in the news again!

2. Thirty-five people, including two soldiers and a policeman,have been killed  in two separate gunfights between security forces and members of the militant Islamist sect,  Boko Haram,  in  Borno State. For more info see: http://www.punchng.com/news/bharam-attacks-military-police-bases-in-borno-again/

3. Seems like Nigerian celebs caught up with my last post on not doing enough for charity. Ice Prince was in the BBA house to discuss poverty and charity yesterday and then Genevieve is asking for donations to move these kids to a better home. This is what we like to see. I really hope this becomes a new trend, even if it’s for publicity it’s better than pictures of gold chains and new cars.

4. When will these women learn that claiming a famous celeb tried to cheat with you is never a good look for your career. And of all rappers to try to drag into the mud, Jigga, Jay-Z, Hova, God MC….This dude can do no wrong. Even if it was true no one cares, it’s Jay-Z! ‘We don’t believe you, you need more people’. Advice for upcoming female artists: AVOID slandering any already famous artist. Here is how she put it:

“I could have messed with Jay, but got respect for Bey, We were on the same set of a commercial, see, I was sitting by myself, and he sat next to me, I was handling it well, and he was shocked to see, I was getting up to leave, he sent his guards to me, Excuse me Miss, do me a favor, put your number on this piece of paper, When Jay get settled and he’ll call you later, I know most chicks would have took the bait, but then those chicks be the ones I hate, I wonder to this day if I’d have gave it up would it be me on stage THROWING IT UP … THROWING IT UP!!”

Schoolgirl is ‘trolled to death

5. A 14 year-old girl has been trolled to death on Ask.fm, This poor girl hung herself after receiving a string of abusive messages online (shame on these trolls!). I don’t know how many kids will commit suicide before sites like Ask.fm and Formsprings get better regulation. Kids need to be educated on handling trolls, and even adults too. Just the other day women were in the news complaining about trolls (Ladies see Rhianna’s responses for how to handle trolls). Let’s be fair, Justin Bieber and One Direction get trolled probably more than anyone on the planet, but as usual it is never as serious when the victim is male.

Inter-state deportation of the poor.

1.Only in Nigeria can a governor round up a group of destitute Nigerians and ship them to another state. Fashola literally had these guys delivered to Anambara State. He isn’t sure where to take the new captured as the governor of Anambara is currently not happy with the first batch. Welcome to Nigeria where freedom is never free.

Will you eat a lab grown burger?

2. With population increase becoming a global issue scientists have decided to grow foods in the lab. I guess genetically modified produces just aren’t cutting it anymore. I wonder if we would be able to taste the difference. See link for more info: http://www.bbc.co.uk/news/science-environment-22885969 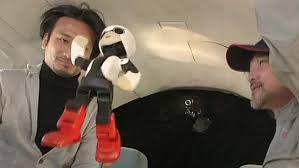 3. Meet Kirobo the talking robot that can hold conversations and is now being sent to space. He is still too small to be scary but we can no longer deny the possibility of co-existing with robots. Anyone remembers iRobot? See link for more info: http://www.telegraph.co.uk/science/space/10221399/Talking-robot-astronaut-blasts-into-space.html

4.The Presidency on Sunday blasted APC leaders saying that they were not only unprogressive but also describing  them as “politically expired” politicians. However, the APC reacted swiftly, saying Nigerians knew very well that  most of the PDP leaders were septuagenarians and octogenarians (see grammar).

APC national leaders – Chief Bisi Akande  is 74 years, Maj.-Gen. Muhamadu Buhari,70;  Asiwaju Bola Tinubu, 61  and Chief Ogbonnaya Onu, 61. The PDP National Chairman, Bamanga Tukur,  is 76; Board of Trustees Chairman, Chief Tony Anenih, is 80  and Chairman, Disciplinary Committee, Umaru Dikko, is 77. Guess we are quite not yet the leaders of tomorrow with these old head running the country. And how about a public manifesto instead of all this in-fighting?

5. I find it very odd that people didn’t just figure out that the NSA was tapping pretty much everything before Snowden. It’s like when it made the news that Micheal Jackson’s kids were adopted and people acted surprised. Those kids have blue eyes. MJ (God rest his soul) might have been paler than a vampire but it still takes double blue phenotypes to have a blue eyed baby.

You have to hand it to the Russians when it comes to having balls in the face of the Americans. These guys no fit shout. Oya, America go and make noise there. All countries are equal but Russia is not Bolivia.

Nigerians in Benin Republic raided and dumped in a camp

ONE THOUSAND YEARS….That has got to be worth at least ten life times. Guess he knows what to be expecting after reincarnation!

Rapper Arrested For Murder Due To Incriminating Lyrics

On the song, which has since been removed from YouTube, Steward raps:

Well there you have it your honor…

Bose said, “We have been together as a happy couple for over 10 years. The birth of these triplets should not separate us. I don’t even know his whereabouts, but I am begging him to come back home for the sake of these innocent babies.”