If you went to school in Africa (Nigerian boarding schools to be precise) you undoubtedly have a completely different perception to what gets passed off as bullying in the West. The concept of cyber-bull where I’m from is more or less an oxymoron (ain’t no body got time for that!). From as early as nine or ten years old most kids (myself included) experience physical bullying in the form of belting and a range of corporal punishments I cannot begin to explain. The school systems are structured to permit this kind of treatment with an unspoken rule that arranges a power structure within students based on what year you are in. Teachers of course are allowed to smack you. While I will not promote or defend bullying in this way, I would point out that this ‘suck it up’ philosophy encourages a certain type of character building unseen in the West as far as bullying is concerned. I have been reading through comments about the victim of cyber bullying on Ask.fm that ended up hanging herself and it has really got me thinking. Of course this is not the first time such a case has arisen and if steps are not taken it wouldn’t be the last either.

Most comments seem to call for better monitoring of these sites, better parental monitoring of children’s internet activity, or blame the victims for not being mature enough to handle the situation. I think it is worth considering how children are socialized these days to figure out if society is not giving kids the tools essential to build strong characters. Could it be possible that in today’s society children are over-protected and under-monitored? I will give an example. In Nigeria it is very common for parents to physically hit their kids to  deter them from repeating an offense. Because this happens to everyone there is no stigma attached to it. No Nigerian grows up feeling ‘abused’ because their parents hit them with a belt or shoe on a few occasions. In the West a parent hitting the child provides this child with a sob story for the rest of their life. I actually remember being teased with the term ‘ajebor’ (posh) in school because I said my parents never hit me. In fact I considered making up that they did just to feel normal!

Do you think old people suggest bringing back the cane because they want others to taste their pain or because they actually believe it is can help for character building?

I do not have kids therefore I feel rather unqualified to suggest a solution, but it is obvious that much needs to be done in regards to character building to reduce the need for social acceptance among the young. Perhaps some scheme rolled out to lecture kids on handling bullying after teaching them how to put condoms over cucumbers? 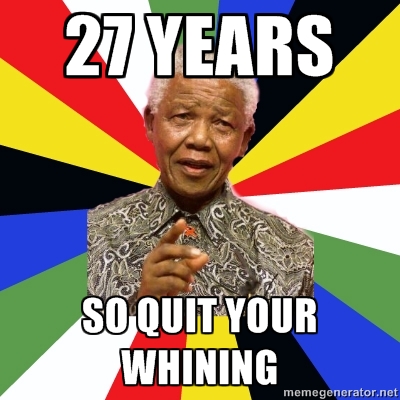 No quite accurate but you get the point….stop bitching

I understand that I run the risk of being branded a sellout or something of that sort with this one, but the day I let thoughts like this deter me is the day I will have officially lost both my balls. Following a heated Facebook debate over a link from a previous article, I have decided to tackle this subject head on. Personally, I am very much against playing the victim. People feel victimized because they condition their minds to feel that way. Anyone noticed how hitting a child in UK is termed child abuse but back home at best it’s corporal punishment. No Nigerian walks around feeling abused because their parents, teachers or seniors in school gave them a good beating. So why do we walk around feeling like victims of colonization? It’s been like 54 years and we still site colonization as the reason for our inability to come together as a country. You can blame the white man for grouping us in one country, but you sure as hell cannot blame him for us not being able to work through our cultural differences. You can definitely not blame him for political corruption or the fact that we haven’t had any visionary leaders since the founding fathers. You cannot blame him for the fact that the elite Nigerians have a self-centered mentality being passed down from one generation to the next.

Let us not forget that colonization introduced the concept of education and birthed modernization which by all counts is a necessity to survive in the global village we inhabit today. I am not trying to ass kiss the British, facts are facts. We can accept them and move on, or we can wallow in the past. As far as I can see the only disadvantage to colonization was the grouping of a culturally diverse region into one country. But if we were so against this idea why did the South and North not allow the East to breakaway to form Biafra? Because everyone wanted a piece of the resources available in the East. I forever commend Zik on agreeing to share power with the North because he believed in the idea of One Nigeria. He believed we could overcome our cultural differences as was outlined in the principles of his philosophy (Zikism). Sadly we have left him turning in his grave and we are blaming the white man like the Naira didn’t used to be equal to the pound. How was the British supposed to know we would elect one idiot after the other or go through military coups after military coup. I have noticed how Nigerians complain about not being able to read blog posts and lets not even get into reading books. It is 2013, information and knowledge like never before is at our finger tips, how about we apply ourselves to learning to build a better society instead of rethinking how the white man did us wrong.

And for the overly religious, the white man brought Christianity to Nigeria too, so next time you are saying praise the Lord don’t forget to thank the British while you are at it. 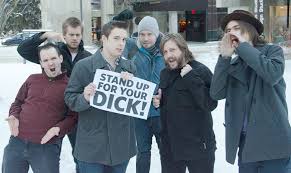 I have always been on the opinion that women would eventually run this world. The moment we removed the need for physical dominance in society the playing field was made equal and ever since then women have been asking for a bigger piece of the pie. And please save me the ‘we were oppressed for so many years’ speech. If that was any valid reason then all Africans should be living a life of luxury sponsored by the West. In the West today (at least in UK), the man will be asked to leave the house if one must leave due to a domestic altercation. Why should the man have to leave even if he isn’t at fault? Verbal abuse is labelled ‘abuse’ and has anyone noticed how it is so normal for women to hit men? Even in movies you see it all the time and no one cares! I heard Nigeria now has a very active women’s union. I commend that, for the longest time women have been overly subjugated but we have to draw the line somewhere. Couples must be made aware that marriage is and will always be a risk of which both parties should be ready to take a loss. It seems like the legal system has so protected women that it has made the decision to get a divorce not just easy but appealing on some level. Men are out here losing houses after paying ten years worth of mortgage charges! And don’t even get me started on alimony and some of the ridiculously unfair child support bills being dished out. In my opinion there should be a standard child support fee, or at least a reasonable maximum.

– Russell Simmons: In February 2009, the hip-hop mogul agreed to pay $40,000 per month in child support for his daughters Ming and Aoki with ex-wife Kimora Lee Simmons. The payments were to continue until both girls reach 19 1/2.

– Britney Spears: In July 2008, months after erratic behavior landed her in the hospital and saw her father appointed conservator of her estate, the pop singer reached a settlement with ex-husband Kevin Federline that had her paying him $20,000 per month in child support.

Anyone see something funny in these numbers? I used to think common sense was enough to handle most of these cases but clearly I was wrong. Anybody remembers Paul and Heather? I will advise every man looking to get married to sign a prenuptial agreement if you don’t want to be living under a car when she leaves your ass. Men have been reported to lose as much as 77% of their net worth following a divorce. No wonder divorced men are prone to suicide. And even when we remarry alimony to the ex-wife still takes precedence over our new expense. I could go on about this and throw more stats at you but it’s time for my morning coffee. I leave you with this:

“We want prenup” Yeah!
It’s something that you need to have
Cause when she leave your ass she gonna leave with half
18 years, 18 years
And on the 18th birthday he found out it wasn’t his?!